During the years Isabelle spent in South Africa, she created INHALE YOGA, a non profit branch of her studio EXHALE YOGA Capetown which she dedicated to the promotion of yoga in the local townships. Whenever she was teaching in Europe, she donated a part of her income to finance her activity with IKAMVAYOUTH in Masiphumelele, not far from Capetown. By the way, Masiphumelele means “together we are strong” which is very meaningful in this context.

The money was spent to teach yoga, to provide food and pay for transport. Isabelle invited her students twice a month to join yoga classes in her studio in Woodstock. It was an intense, challenging but unforgettable and rewarding experience.

When she left for Europe, Isabelle had the feeling to let the girls of her yoga group down since there was no one to follow up on her work. Therefore she produced a yoga video in collaboration with Jay Mac (filmmaker, vegan chef and Jivamukti yoga teacher) as Good Bye present for her students to allow them practice by themselves. This video can still be purchased on USB stick at the studio and the proceeds will be donated to IKAMVAYOUTH in South Africa.

At EXHALE YOGA Luxembourg, Isabelle will continue to organize yoga classes for charity. The donations will be send to IKAMVAYOUTH, a trusted organization, which dedicated mission is to enable disadvantaged youth to pull themselves and each other out of poverty and into education and employment. It is still a long way and in the last years South Africa had enormous set backs on many levels. Not only the economy is down but the already existing violence towards women and girls has grown immeasurably. The years of apartheid have left deep scars and there are still unresolved race issues.

Amongst all the suffering, there are so many beautiful and generous people with joyful hearts. It was always one of Isabelle main focuses to empower the girls who attended her yoga classes and besides the physical practice, teach them that they have rights and that they should keep on working towards their goals and independence.

“Our deepest fear is not that we are inadequate. Our deepest fear is that we are powerful beyond measure. It is our light, not our darkness, that frightens us most. We ask ourselves, “Who am I to be brilliant, gorgeous, talented and famous?” Actually, who are you not to be? You are a child of God. Your playing small does not serve the world. There is nothing enlightening about shrinking so that people won’t feel insecure around you. We were born to make manifest the glory of God that is within us. Its’s not just in some of us; it’s in all of us. And when we let our own light shine, we unconsciously give other people permission to do the same. As we are liberated from our own fear, our presence automatically liberates others.”
NELSON MANDELA 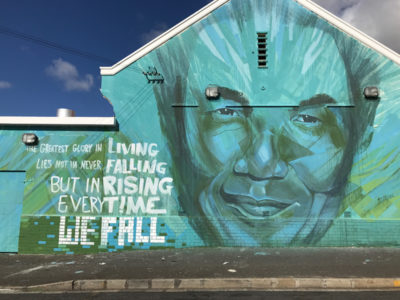